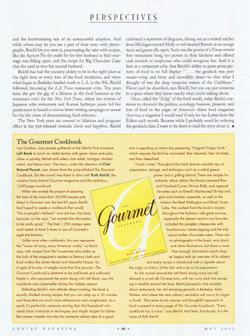 Last October, sixty people gathered at the Menlo Park brasserie Left Bank to lunch on rabbit terrine with green olives and pistachios, a parsley, fennel and celery root salad, tarragon chicken salad and lemon bars. The menu, under the direction of Chef Roland Passot, was drawn from the just-published Gourmet Cookbook. But the crowd was there to dine with Ruth Reichl, the creative force behind Gourmet magazine and the ambitious 1,040-page cookbook.

When she started the project of selecting the best of the more than 50,000 recipes published in Gourmet over the last 60 years, Reichl had hoped to create a cookbook that would "live in people's kitchens" -- and she has. Not least because, as she says, "we wanted the information to be really good." The final 1,200 recipes were each tested at least 5 times in one of Gourmet's eight test kitchens. The recipe for leftover chicken that began with "Saw the tops off of six fresh coconuts" didn't make the cut.

Unlike most other cookbooks, this one represents the "voices of many, many American cooks," as Reichl says, with recipes from the housewives who make up the bulk of the magazine's readers to famous chefs and food writers like James Beard and Marcella Hazan. So, in spite of its size – it weighs in at more than five pounds – The Gourmet Cookbook is destined to be well-loved and well-used. Kepler's, who sponsored the event along with Left Bank, says the cookbook was a best-seller during the holiday season.

Reflecting Reichl's own attitude about cooking, the book is equally divided among recipes that you can whip up in 30 minutes and those that are much more adventurous and complicated. As a result, it's perfect for someone moving starting their first household who needs basic instruction in techniques and simple recipes for dishes like cheese omelets -- but also for someone whose idea of a good time is spending an entire day preparing "Fragrant Crispy Duck," which requires the bird be marinated, then steamed, then air-dried, and then deep-fried.

"Cook's notes" throughout the book feature valuable tips on preparation, storage, and technique – such as a salad greens primer and a grilling tutorial. There are recipes for authentic ethnic dishes like a Persian Jeweled Rice and Hundred-Corner Shrimp Balls, and regional favorites such as Emeril's Barbecued Shrimp and grits and cheddar casserole, as well as the classics like Beef Wellington and Black Forest cake. We cooked from the book's recipes throughout the holidays with great success, especially the dessert section -- our favorites included the pumpkin cheesecake with bourbon-sour cream topping and the individual molten chocolate cakes. There are no photographs in the book, only black and white illustrations, but there is more than enough information -- each chapter begins with an overview of its subject and every recipe is introduced with a vignette about the origin or history of the dish and a tip on its preparation.

As she moved around the Left Bank dining room last fall, dressed in a red silk Chinese tunic, with her curly dark hair escaping in tendrils around her face, Reichl paused to chat amiably about restaurants, her old stomping grounds in Berkeley, Alice Waters, and where the next culinary revolution will occur (in organic food). That same lovely manner and thoughtful approach to food is present in every page of The Gourmet Cookbook. "Every cookbook has a voice," says Reichl. And here, fortuitously, it is the voice of Ruth Reichl.